The BAI is pleased to announce and welcome Aidan Hart as  Honorary President. 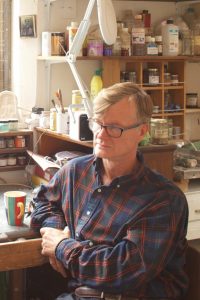 Aidan was born in U.K. in 1957 but grew up in New Zealand, where he worked as a full time sculptor after completing a degree in English Literature and a Diploma in Secondary Education teaching. He joined the Orthodox Church in 1983 and on returning to England began to work as a professional iconographer. As he continued his work as an iconographer, Aidan tested his vocation as a monk which included spending two years on Mount Athos (a peninsular off Greece which has numerous Monasteries). After returning to England he spent six years as a hermit in Shropshire. This intense life of prayer had a profound effect on his work. He is now married with two children who are “his best icons yet.”

Since Aidan has had many commissions over thirty years he has gained much experience in various art media to include panel painting in egg tempera as well as fresco, mosaic, stone and wood carving and also illuminating manuscript painting, wood and stone carving as well as designs for church furnishing.

Part of his work has been training others in liturgical arts and in 2009 he founded a part time certificate programme for Icon painting at the Princes Foundation School of Traditional Arts, where he still teaches.  Martin Earle, a highly gifted artist, is at present working with Aidan on projects and since 2018 Aidan has been joined by a gifted artist, Dr. James Blackstone, as an apprentice.

Since Aidan has a growing demand for commissions including Church furnishings, he works with a team of highly skilled craftspeople which also includes cabinetmakers, blacksmiths and foundries. 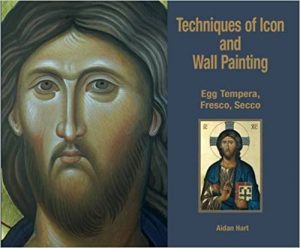 Aidan Hart’s book on “Techniques of Icon and Wall Painting”  (May 2011) is the most extensive book yet published on this subject.

It has been published by Gracewing Ltd  (www.gracewing.co.uk) who have also published Aidan’s book called “Beauty Spirit Matter”  – a collection of Aidan’s essays (May 2014). 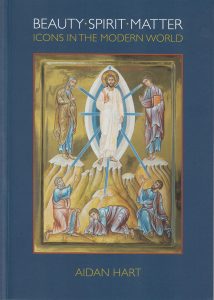 At the moment Aidan is working on his third book entitled: “The History and Meaning of Festal Icons” which will be published in 2021. This will be another needful and valuable book for those undertaking or merely interested in this the sacred art of Icon painting.