The New Martyr Elizabeth was born on February 27th 1864.  Elizabeth’s grandmother was Queen Victoria as Elizabeth’s mother, Princess Alice, was one of Queen Victoria’s daughters. Princess Alice had married Grand Duke Louis of Hesse. In 1878 diphtheria afflicted the Hesse household and Elizabeth was the only survivor due to not being in Hesse at the time of the outbreak. She was orphaned at the age of fourteen years and partially brought up by Queen Victoria. In June 1884 Elizabeth married Grand Duke Sergei of Russia. After she arrived in Russia Elizabeth studied the national characteristics and especially their Orthodox faith. In 1891, on the Saturday before Palm Sunday (Lazarus Saturday) the Grand Duchess Elizabeth was received into the Orthodox Church. 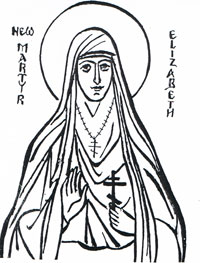 This was her own choice and Metropolititan Anastassy confirmed this: “The Grand Duchess of her own volition decided to unite herself to the Orthodox Church. When she made her announcement to her husband,according to the account of one of the servants, tears involuntarily poured from his eyes. The Emperor Alexander himself was deeply touched by her decision. Her husband blessed her after Holy Chrismation with a precious icon of the Saviour ‘Not Made by Human Hands’ which she treasured throughout the remaining course of her life. Having been joined to the faith in this manner, and thereby to all that makes up the soul of a Russian, the Grand Duchess could now with every right say to her husband in the words of Moabite Ruth: “Your people have become my people and your God my God.” (Ruth 1.16)

However the Grand Duchess’s conversion to Orthodoxy caused some negative reactions from her family. Elizabeth wrote to them that she was “intensely happy” and that it caused her painto grieve her family and assured them: “that God’s blessing will accompany my act which I do with fervent belief, with the feeling that I may become a better Christian and be one step nearer to God.” She also mentioned that “Above all one’s conscience must be pure and true … many will scream about (it), yet I feel it brings me nearer to od…You tell me that the purer brilliance of the church charmed me … in that you are mistaken – nothing in the outer signs attracted me … the service, the outer signs, are only to remind us of the inner things.” Furthermore Elizabeth explained that she would be “lying before God” to remain “outwardly a Protestant.”  It was Queen Victoria who showed the most understanding and provided Elizabeth with moral support for her decision.

The assassination of Elizabeth’s husband

On February 18th 1905, while on duty in the Kremlin, Elizabeth’s husband was assassinated by a bomb thrown by a Social-Revolutionary, Ivan Kalyayev. It is recorded that Grand Duchess Elizabeth heard the explosion and in a shocked state rushed outside, gathered the dismembered body of her husband strewn around the snow covered square and arranged for the Grand Duke’s coachman, who was severely wounded, to be taken to hospital.

She later visited the dying man and enabled him to die peacefully by telling him that the Grand Duke was well and safe. After her time of mourning she also visited her assassin in prison and asked him why he killed her husband. He explained that he did not wish to kill her and even withheld throwing the bomb on several occasions when she was with the Duke. Elizabeth told him: “by killing him (the Duke) you were killing me.” The Grand Duchess left the criminal with a Gospel book and begged him to read it, left the prison and lamented: “My attempt was unsuccessful, but who knows, perhaps at the last minute he will understand and repent.”

Life as a nun devoted to the poor

After her time of mourning for the Grand Duke, Grand Duchess Elizabeth became a nun and gave away her jewellery and sold her luxurious possessions. From the proceeds she opened a Home in Moscow to foster the prayer and charity of devout women. The Home was dedicated to Martha and Mary, and Elizabeth helped the poor and orphans. It was here that seventeen women were dedicated as Sisters of Love and Mercy in April 1909. They also opened a hospital and a variety of other philanthropic ventures as their work started to flourish. Grand Duchess Elizabeth had also envisioned a diaconate for women but due to a misunderstanding with a Bishop she was unable to do this.

The communist government exiled her to Yekaterinburg in 1918 and then she was moved to Alapaesvsk, where she was killed by the local Bolsheviks on July 18th 1918 together with other Dukes, Princes and courtiers and Nun Barbara, a Sister from the Grand Duchess Elizabeth’s Convent. They were all herded into the forest and pushed into an abandoned mineshaft, into which grenades were then hurled. It was reported that an observer heard them singing Church hymns as they were pushed into the mine shaft, and after the Bolsheviks left he could still hear them singing for a while. Elizabeth’s last act as she lay dying in the mineshaft was to bandage the wounds of Prince loann with her handkerchief. The White Army later recaptured this area and Elizabeth’s relics were taken by the Army to Beijing and placed in the Church of St. Seraphim of Sarov. Later they were taken to Jerusalem and placed in the Church of St. Mary Magdalene, which Elizabeth and her husband had helped to build. It was one of Elizabeth’s wishes that she be buried here and today her tomb can be visited.

The Grand Duchess Elizabeth was glorified as the New Martyr Elizabeth by the Russian Orthodox Church Outside of Russia in 1981 and then by the Russian Orthodox Church as a whole on 1992. In 1992 a portion of her relics were taken to 61 dioceses of Russia and the Commonwealth of Independent States. The Saints Martha and Mary Convent was given some of these relics. The New Marty Elizabeth’s statue is to be seen above the Great West Door of Westminster Abbey in London as one of the ten twentieth century martyrs across the world.

Her Feast day is celebrated on July 5th (New Calendar) or July 5th (Old Calendar). She is also commemorated on the feast of the New Martyrs and Confessors of Russia on the Sunday nearest to 25th January.

What we can see in the icons of Elizabeth

Elizabeth is shown as a nun and holds a Russian Cross in her hand.

Hymns reflect both Elizabeth’s care for others and her struggles: “having loved the Creator of the heavens from your youth, you took care to exercise yourself in prayer and contemplation of God even before you came to know the true Orthodox faith. You bedewed your soul with the Word of God and remained utterly faithful to Christ, our God.”

“From your youth, faith in Almighty God, prepared you for the struggle of love and loving kindness. Therefore you forgave the slayer of your husband, and gave yourself over to Monastic life.

Hymns also remember Elizabeth’s companion, Martyr Barbara: “Elizabeth and Barbara, her fellow sufferer, served Christ in this life with ascetic labours and good deeds and shone like the passion-bearers. Behold now they have received crowns of martyrs from the hands of the Saviour.” “You rejected worldly vanity and glory, having chosen the way of the ascetics and you were guided by Saints Mary and Martha, the sisters of Lazarus, how to unite the teachings of Christ with good deeds. Together with Barbara, your fellow struggler, you received a martyr’s death. Wherefore Christ crowned you with a twofold crown, 0 humble and wise Elizabeth.”

“Taking up the Cross of Christ you passed from royal glory to the glory of heaven and prayed for your enemies. 0 holy Martyr Elizabeth, together with the Martyr Barbara, you found everlasting joy. Therefore pray on behalf of our souls.”

Finally the hymns can enable us in desire to emulate Elizabeth’s steadfastness and courage: “We do homage to your struggle and your compassionate loving kindness, 0 divinely wise Elizabeth, praising your courage in the face of torments and your ardent love for your neighbour in the midst of suffering.’…. “In the midst of worldliness your mournful heart dwelt in heaven; in barbaric godlessness your valiant soul was not troubled. You went to meet your Bridegroomas a confessor and he found you with your martyric purpose. 0 Elizabeth with Barbara, your brave companion, pray to the Bridegroom for us.”

“In Russia, 0 venerable martyr Elizabeth, you discovered the priceless pearl of the pure Orthodox Faith which you accepted with all heart and spirit, and now standing before God in the heavens, pray to Him for us, who feel sinful and useless.”

(Some material re-sourced from Orthodoxwiki.org)