Sr. Esther, a sister at Turvey Abbey is an experienced iconographer who leads a number of icon-centred workshops and retreats at Turvey every year. Some are focused on the actual techniques involved in creating icons, some are focused on 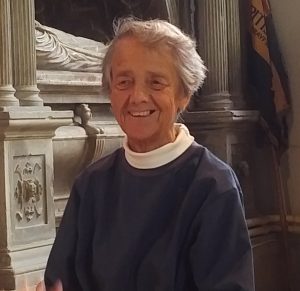 engaging with icons and using them in prayer, and others combine the two approaches. There are offerings for people at all levels of experience, from those who are just developing an interest in icons to those who are already iconographers themselves. Please visit the Icon Events page on the Turvey Abbey webpage to learn more about the workshops and retreats being offered at Turvey.

Sr Esther has painted icons for churches in England and abroad as well as for individuals and would be happy to discuss your needs if you are thinking of commissioning an icon. Each commission is undertaken with patience and care; costs and other arrangements are decided on a case-by-case basis. Sr Esther is one of the founders of the British Association of Iconographers and is the Association President.

Together with the smell of incense and the melody of music, icons can engage worshippers as whole people in awareness of the Presence of God. This brief introduction indicates why members of various traditions find icons helpful in their prayer.

The word iconography comes from the Greek words for ‘image’ and ‘writing’.

The practice of ‘image-writing’ is quite different from Western art. Since the Renaissance, Western art has been influenced by naturalism, sensualism and an interest in how things work – artists have studied anatomy, for example. It has also been

stimulated by ideals and ideas. This is not so with icons. Originating within the liturgical and philosophical setting of Byzantine culture and life, icons aim to express the spiritual and idealistic vision of Orthodoxy. Their aim includes conscious awareness of the spiritualisation or ‘deification’ (in Orthodox terminology) of matter: the pledge of an already redeemed creation and the coming victory over a fallen one; the expression of the future unity of the whole of creation; and a visible manifestation of humankind’s spiritual power to redeem creation through beauty and art. The presentation of such beauty awakens vital forces of life.

The sensory aspect of corruptible flesh thus becomes spiritualised, and in their icons saints are seen as being reformed to their true and original being, as intended by God in Christ. The artist seeks to express the Divine nature with which Christ is one way of depicting the Virgin and Child is that known as Mother of God of Tenderness and Compassion. In this the Child’s face touches that of the Mother, who contemplatively gazes beyond the Child or at the onlooker, drawing us to her Son. Icons showing the Mother of God always depict three stars based on a cruciform shape – one on her head and two on her shoulders (though in this particular Icon the last two are hidden by the Child and the Mother’s outer garment): these symbolise that Mary was a virgin before, during and after the birth. The words In the cruciform shape In the halo are a shortened form of’! am who Jam’ in Greek; and further abbreviations represent the Mother of God (at the top) and Jesus Christ (at the right). The golden stripes on the Child’s garment signify Divine energy and the Child holds a prophetic scroll. (The illustration Is a line drawing based on an icon painted at Turvey Abbey.) When looking at the image of Christ, the Mother of God or a saint, therefore, one is looking not at an earthly portrait but at a person transfigured in Christ – at an image of the invisible.

An icon is much more than merely a visual teaching aid or picture: it has about it asacrament.al quality. Within Orthodoxy, icons are venerated (but not worshipped) just as the Bible is held in honour and revered. The Council of Constantinople in AD 860 stated, ‘that which the book tells us in words, the icon announces to us by colour and makes present to us’. And St John Damascene affirmed that ‘icons are theology not only in words but in images’.

The art of icons

Sr Esther painting an icon of St John the Baptist

The human exterior, its clothing, hair and the parts of the body, are not represented literally but expressed stylistically, using haloes, lines, and specific colours, forms and postures. For example, clothing, though expressed logically, takes on geometrical forms with a pattern of lights and lines on its folds. Faces frequently have thin mouths and large eyes which lack brilliance. The hair, the wrinkles and the whole body of the saint show unification and convey a sense of harmony and serenity. This feeling also applies to the subject matter- the supreme and best-known example being Rublev’s Trinity (painted 1408-25), referred to by the Council of a Hundred Chapters as the ‘icon of icons’. This icon conveys a feeling of simplicity of form, calmness of movement, rhythm of line and joyfulness of colour springing from inner harmony – a combination aimed at by all icons. Furthermore, there is in icons little attempt to depict landscape or architecture in correct proportion: instead, the landscape may show a transformed cosmos with rocks thrusting outwards and upwards, and buildings maybe painted with inverse perspective to daw the onlooker into what the image affirms and expresses.

Icons and our own prayer life

Icons are an aid not only in liturgical settings but also privately, in nourishing the individual’s inner world of prayer and contemplation. St John Damascene, a great defender of icons during the iconoclastic controversy of 717-54, said:

‘When my thoughts torment me and prevent me from reading,  I go to Church. My gaze is held and my soul is moved to praise God. I contemplate the martyr’s valour … and his zeal inflames me . . – I adore and pray to God through the martyr’s intercession and communion’.

It is also recorded that Rublev and his co-workers would sometimes spend hours just contemplating what they had painted. And a contemporary author, Henri Nouwen (in Behold the Beauty of the Lord: praying with icons, Ave Maria Press, 1987), has written:

‘Icons are painted to lead us into the inner room of prayer and bring us close to the heart of Go.  Every time I entrust myself to these images, move beyond my curious questions about their origin, history and artistic value and let them speak to me in their own language, they draw me into closer communion with the God of love’.