In the Orthodox Church the fifth Sunday after Easter is called the Sunday of the Samaritan Woman. This Sunday is based on the Gospel account of Jesus’ encounter with the Samaritan woman in John 4: 1-42. Tradition names the woman as Photini. After her encounter with Christ she laboured to spread the Gospel in various places. Tradition further establishes that she finally received the crown of martyrdom in Rome with her two sons and five sisters during the persecutions under the Emperor Nero. Her sisters have been named as Antalole, Phota, Photi, Praskevi and Kyriaki. Photini and her martyred sisters are commemorated on February 26th. 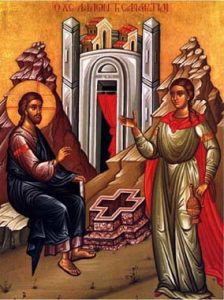 What we see in this icon:

In the icon of the Sunday of the Samaritan Woman, she is shown sitting on the well-head or standing beside it. In one hand she holds a pitcher for drawing water and stretches out the other towards Christ. In front of her there may be a water jar. Christ is seated on a nearby rock, or is standing and is blessing the woman. Sometimes the apostles stand astonished behind Him.

Some inspirational verses from Matins, Vespers and Lauds of the day, express the concealment of the woman and her bluntness in telling Christ that Jews do not associate with Samaritans. They also contrast Christ’s own concealment concerning His divinity within His humanity in relation to “who it really is” that is asking her for water. Also her faith and response is expressed in the verses. Some of these verses have been assembled together to illustrate these points.

The source of wonders himself came to the well at the sixth hour to give life to Eve’s offspring. For at the very same hour Eve departed from Paradise, tricked by the serpent. So the Samaritan woman came to draw water.

When the Lord came to the well the Samaritan woman asked Him in His compassion: “Give me the water of faith and I will receive baptism’s waters of joy and redemption.” Glory to you, Life-giving Lord!

The Lord Guides the Woman to ask for Eternal Water

Speaking as though to a human being and not to God, she tried to conceal herself and said” I have no husband.” When the Samaritan woman told Him that Jews do not share things in common with Samaritans, the wise Creator guided her with soft words rather to ask for eternal water… By Jacob’s well Jesus found the Samaritan woman… This is what the Lord said to the Samarian woman: “If you knew the gift of God, and who it is that is saying to you: ‘give me water to drink,’ you would have asked Him and He would have given you to drink so that you would never be thirsty again.”

He who it is Revealed Himself in Such Verse

He who covers the earth with clouds asked her for water.

He who surrounds the clouds with water asked her for water.

He who clothes the clouds with water came to the woman and asked her for water.

He who is borne by the cherubim spoke with a harlot.

He who suspended the earth above the waters asked her for water.

He, the source of water’s springs and pools, looked for water.

For He wished to give the water of life to drink to her who was aflame with improper desires.

For He wished to draw to Himself the woman ensnared by the fierce enemy.

For He alone is compassionate and loves humankind.

The Woman Generously Drank of the Lord whose Memory is Eternal

When the Samaritan woman came in faith to the well and saw you, the water of wisdom, she drank of you generously, and inherited the kingdom… Her repute is eternal… He came to search for His own image, and His praise is eternal.

The Woman Eagerly Ran to Tell the Others

The Samaritan woman heard your word and when she received your word she left her water jar at the well and ran back, telling those in the city: “Come and see a man who knows human hearts. Can He be the Christ we expect, who has great mercy? Come and see Him who knows what is hidden and is God come in flesh to save humankind…”

A similar understanding is given by Pamela Hayes  (the following is taken from her book) :

‘The Heart is a Sacred Space’ So the Samaritan woman’s gospel is simply this. It is about Jesus as she has experienced Him in her own life. It is obvious she cares a great deal about this man, that He knows all about her, and that she is happy. The Samaritans whom she is also addressing know about her from another point of view. But it is clear it doesn’t matter any more what people think about her. What matters is what has changed her whole outlook. If others know how she was before, then they will know even more how she has changed: what in fact Jesus has done for her. Who she is… Because they can see what has happened to the woman, the Samaritans come to believe in Jesus and ask Him to stay with them. But having met Him for themselves, many more come to believe in Jesus. The woman had become an instrument in God’s hands, a Christ-like figure herself, sharing His mission on earth, so that others like the Samaritans could say: “We know that this is truly the Saviour of the world.” (John.4:42).

Illuminated by the Holy Spirit you drank with great ardent longing of the waters of Christ our Saviour. With these streams of salvation you were refreshed…O Photine, great martyr and peer of the Apostles, entreat Christ God to grant great mercy to us…

Photine the glorious and glory of the martyrs who entered the mansions of heaven, you call us to sing praises that all might be recompensed with your graces. Let us with faith and longing extol her gladly in hymns and triumphant joy.