The Iconostasis in the Coptic Orthodox Church

Iconostasis is a word of Greek origin, meaning literally icon-stand. Over the centuries the iconostasis has become an integral part of Eastern and Oriental Orthodox Church architecture.

One of the main functions of the iconostasis is to divide the sanctuary from the nave. In Egypt, as elsewhere in Orthodox Christendom, the iconostasis, as we know it today, is a relatively recent development, dating to the 17th or 18th century at most. From earliest times, Christian buildings possessed a low wall or chancel, which divided the sanctuary from the rest of the congregation, but allowed complete view of the officiating clergy. Free standing columns were later added, followed by an architrave attached to the capitals. The rood screen found in old English churches is a remnant of the chancel that, perhaps due to the violent iconoclasm of the reformation, never evolved into an iconostasis proper in the British Isles. In the East, the chancel gained height and evolved, over time becoming a wall upon which icons were hung, eventually forming the iconostasis as seen today in all Orthodox Churches. This fact is easily verifiable when observing the rows of 18th c. icons surmounting the screens in the most ancient Coptic churches of old Cairo and elsewhere in Egypt. The icons indicate by the way they are placed, i.e. on top of the screen, that they are indeed a later addition, as in the case of the main screen in the church of St Mercurios, old Cairo, commissioned by Pope Marcos VII in AD 1745. The wooden screen upon which they are fixed date back to the Fatimid period, 9th – 11th centuries. The screens from this period were made of small wooden panels assembled together without the use of nails or glue. These small panels were often inlaid with ivory, ebony and mother of pearl and exquisitely carved by the Coptic craftsmen who excelled at this craft and were known for it far and wide in the ancient world, working not only for Christian patrons, but also for Muslim ones. These screens usually have only one door in the centre, the Royal Door, through which only clergy may pass. There are normally two small windows on either side through which the communicants received the holy sacraments, left for the men, right for the women. 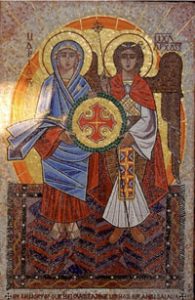 Liturgically the iconostasis stands at the threshold between heaven and earth that is between the spiritual and sensual realms. The area of the sanctuary is the most sacred space in a church, the equivalent of the Holy of Holies of the Jerusalem temple, the closest place to the kingdom of God on earth and one is required to take off one’s shoes before entering it, as it is written: “Put off thy shoes for thou art standing on holy ground” (Ex. 3:5).

Icons found on the iconostasis usually follow a specific order, unveiling the whole scheme of salvation to the worshipper. A typical contemporary iconostasis should include the icon of the Lord and the Theotokos enthroned, the Archangels Michael and Gabriel, the 12 apostles and evangelists, church hierarchs, saints, martyrs or ascetics, as well as the 12 major feasts. Directly above the Royal Door, the image of the Last Supper is often found, with the disciples gathered around Christ, this is the icon of the Eucharist. The icon of the crucifixion is always placed on top of the iconostasis, usually mounted on a small plinth symbolizing Mount Golgotha. The use of a partition or curtain to isolate the sanctuary goes back to the Exodus period and the making of the tabernacle in the wilderness of Sinai- itself a blue print for the temple at Jerusalem. The pre-Christian temples of Egypt and Greece also isolated their most sacred place, the naos, which only the high priest was allowed to enter. It would appear that the earliest Christian buildings provided for a separation between the sanctuary and the rest of the building. The catechumen, non baptized members, were only allowed to stay until the reading of the gospel, after which they were required to leave the church, leaving the baptized congregation to take part in the holy sacraments. The need for the protection of the sacraments is alluded to by St Basil when he writes, “how could it be proper to publicly proclaim those things which no unbaptized person may so much as look upon”. Although he was referring to the writings and doctrines concerning the holy sacraments, the latter part of this statement directly refers to the necessity to specially protect the sacred elements from the gaze of the profane and ignorant”.

Today, Coptic churches and all other Orthodox Church buildings, are designed with an iconostasis. The concept has been fully assimilated by modern architects, giving rise to some interesting developments in design, reflecting a new willingness by the church to make the liturgy more accessible to the congregation who are able to see what goes on inside the sanctuary and participate more fully in the liturgy. This is particularly true in America, where thriving Christian Orthodox communities, both Eastern and Oriental, commission imposing new buildings, thus fostering new developments in liturgical art and architecture.

The use of the iconostasis in the Orthodox Church seems to emphasize separation and divorce. Its spiritual meaning however is quite the opposite. Although, on the one hand, it divides the spiritual world from the sensual, on another level, the iconostasis also unites the two into one perfected creation – separation, loss and death, are overcome and reconciliation is achieved between creator and creature, and within the creature itself. Standing as it does, on the boundary line between the divine and the human realms, the iconostasis reveals by means of sacred images, as fully as possible, the way of this reconciliation.(3) The Royal Door is a symbol of Christ Himself “… I am the door …” (John 10:9). 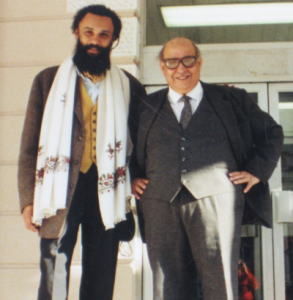 Stéphane René is a leading exponent of the Neo-Coptic School. He studied under the school’s founder, the late Prof. Isaac Fanous, at the Institute of Coptic Studies, Cairo and received his PhD from the Royal College of Art, London in 1990. He teaches regular classes and leads workshops internationally. He supervises doctoral research in iconography at the Prince’s School of Traditional Art, London and is the director of Sacred Space Gallery at St John’s Notting Hill, London. His work can be found in Coptic, Anglican and Catholic churches in Europe and the USA.