It is very easy to be beguiled by this beautiful monastery. However after six visits, with things as they are in the Middle East not least the continuing upheaval in Egypt, I imagine visits there will not be easy for the time being. The monastery was closed for a short period this autumn, but has now reopened. At time of writing one has to travel in a police convoy from the airport. My first visit in 2004 was specifically to gather more work for an upcoming exhibition in London of Middle Eastern oil paintings. I have been a plein air painter for over thirty years, mostly in the Middle East. However, during the previous twelve months I had been introduced to icons, which was to change the direction of my work, fortunate, given the recent difficulties in that area. Most especially I was very keen to see the tall 11th century Moses icon at St Catherine’s. I had actually tried to copy this in oils, which was not a success. Clearly at some stage I had to learn how to ‘write’ icons. However, if on this trip I could combine ‘work’ with also seeing the 11th century icon of Moses, (which has an Arabic inscription on it which suggests it was painted for the monastery), then that was a definite plus. Later, this icon did come to London for the Byzantine Exhibition at the RA in 2009. An interesting feature in the other Moses icon (13th century) – where he is taking off his sandal – is that there is a tiny figure in the bottom left hand corner; it is thought this might be a self-portrait of the artist. There were four of us on this working trip and we spent a whole week there. In those days there was only one flight in and out of the nearest airport at Sharm al Sheikh a week, and we were the only people on this flight that were not divers. 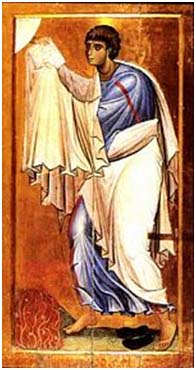 After a couple of days one of the monks asked if he could come and watch me paint. Later on, some distance up a wadi, I was somewhat startled to hear a mobile go off: I had forgotten I had someone with me. Not only did it greatly amuse me that monks actually carry mobiles but that there was even a signal in that wilderness. On a later occasion I saw a mobile being used in the Basilica to light the texts.

The second visit was in 2005, with a different group of four. We took a Coptic driver from Cairo which we thought would be safer it being Ramadan at the time as he would not be fasting all day. We spent a week painting at the Monasteries of St Anthony and St Paul on the east coast of Egypt. I wrote about this trip in another BAI journal at the time. We then made our way, painting as we went along, to Ismailia and the Suez Canal down the West coast of Sinai up through the Wadi Feiran, now closed to foreigners, to St. Catherine’s. It was just so wonderful, like coming home. We stayed again in their excellent guesthouse and were given a big welcome by the monks including free viewings of the museum which of course was a joy; the treasures in there are breath taking. After this visit the monastery commissioned me to paint a large oil of the whole complex, so it made for a very long painting. Clearly this had to be done in UK as I did not have a canvas of that size with me. The problems of getting it out there later were legion, but eventually with the help of the Foreign Office it now hangs in their guest house reception.

My third visit was in 2008. I travelled from Istanbul by train, joining my husband in Aqaba. We took the ferry from Aqaba to Nuweiba, definitely not to be recommended. It was only a brief visit to introduce my husband to the monastery. The monks were most gracious and had us both as ‘guests’ for the two nights. The librarian Fr. Justin (pictured) took us up to the famous library and spent some considerable time showing us the manuscripts the illuminated works by St Climacus and other luminaries, and how they were digitally photographing all the famous works.

My fourth visit in 2009 with another girl was also brief. It was so nice to be collected from Dahab by my favourite regular driver Saleh from Katerina village. On this visit he introduced me to his wife and father. Since the drive across the desert is mostly at night and takes two and half-hours, it is quite important to know ones driver if possible. This was quite a strain on my rusting Arabic. However something amusing did happen on this visit; it was at Mass one morning when suddenly everything went dark although it wasn’t Good Friday or anything like that. They shut the Royal Doors and blew out the few candles that were lit, and turned off any lights. Thinking that was the end, I went outside. Sitting on the bench waiting for the few others to appear I could not quite understand why they did not, so I thought I’d better go back inside to see. They relit all the candles and opened the Royal Doors and there was the priest standing with arms outstretched, light shining through his translucent, iridescent robes, truly radiant…………….I seriously thought I was having a vision! Talking to Fr. Justin about this later he said the windows were so positioned that, on the equinox, the sun rose above the peaks and cast its rays through the rear window just exactly at the right moment to cause this effect.

My fifth visit was in 2010, again for painting, watercolour this time as well as oil and followed much the same pattern as previous trips. Except this time the artist monk, who by now I had come to know as a mosaicist, wanted lessons in watercolour. This was actually quite amusing as he had a bedu come and join us. The monastery supports 150 bedu families; they do all the general work, supplying camels, looking after the guesthouse and anything really involving the tourists. Currently things are very hard for them as there are virtually no tourists. In the museum there is a copy of a document with a handprint of Mohammed stating that the Muslims will never invade the Monastery. The original is in the Topkapi in Istanbul. On this occasion we returned to Sharm el Sheikh the long way round via the monastery motherhouse in El Tur, which is west of Katerina.

My sixth and probably last visit was in 2011 and came about because the monk, Fr. Gregory, whom I had been helping with painting in the past, invited me and another girl to join him on an advanced gilding course. He had brought Radoslav Hristov (pictured here) from Bulgaria. Radoslav must be the gilder par excellence; I have never seen such work done by anyone else. This was in late December. It was freezing, no heating except in the bedrooms (thank goodness) and we worked wearing head covering and several layers of jumpers and mitts when we could. I had electric socks too for which I was most grateful! We worked for seven days from 9.30 am to 5pm each day. The light was not good after 3pm as the monastery is in a deep valley. The dry conditions also made gilding quite tricky, because damp conditions are better for this. However I think we all learned a lot and Radoslav was most patient with us. All I need now is an awful lot of practice. We each worked on a different image; mine, below, is a Spanish Travelling Icon of St Catherine. The original is in the monastery museum.

In the newspapers after our return…”Sinai gunmen release US tourists – two US women tourists and their Egyptian guide were kidnapped in the south of Egypt, Sinai Peninsular and have been released!” 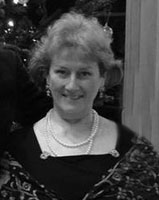 In 2004 she was commissioned to paint 14 Stations of the Resurrection for the publication ‘Way To Life’ published by Redemptorist Publications in 2006 and Liguori Publications in the USA in 2007. She has exhibited with BADA, in St. Cuthbert’s Centre Holy Island, and with the British Association of Iconographers.

Having originally trained at the Corcoran Gallery School of Art in Washington DC and attending master classes at the Slade School of Art in London, Caroline has painted and exhibited all her life. Covering mostly the Middle East; she has exhibited in the Atlantic Gallery, Washington DC and at The Royal Academy, Rafael Valls Ltd, The Mathaf Gallery, Indar Pasricha Fine Arts and many other galleries.

In 1992 there was a book commissioned by Airlife Publishing Ltd; ‘Caroline Lees Watercolours of Shropshire’.

In 2004 she was commissioned to paint a series of icons for the publication ‘Way To Life’ published by Redemptorist Publications in 2006 and Liguori Publications in the USA in 2007.

In 2011 she was invited to attend an advanced gilding course with Radoslav Hristov at St. Catherine’s Monastery, Sinai. 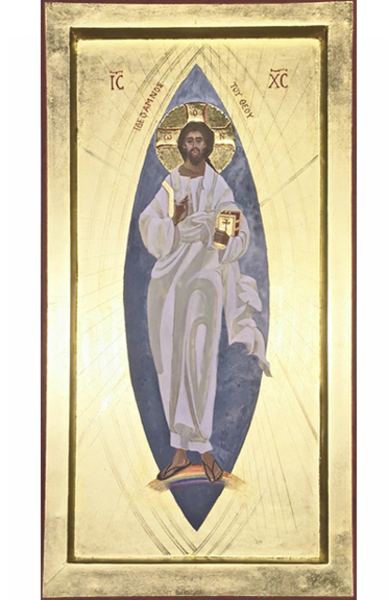 Christ of the New Testament

Anthony Eyton RA said of her oil in the Summer Exhibition 2011..”A lovely fresh piece of work”

To view Caroline’s icons, please visit her website at:
www.carolinelees.co.uk/sacred-icons

“The process of icon writing is a long one. After preparing the wood it then has to be lined with cloth and painted with many coats of gesso. It then has to be sanded and polished until it shines. The image is then marked, and the areas that are to be gilded are then painted several times with clay bole. It is at this stage that the gold is laid and burnished with agate, and painting with pigment and egg yolk can then begin. When all is finished and dried it is then varnished or polished.”