It is thought that St. George lived in the third century and came from Asia Minor or one of the surrounding countries such as Lebanon or Palestine. George was one of the local nobility who had risen to a high rank in the Roman army. He tore up an edict from the Emperor Diocletian, which ordered the persecution of Christians. It is related that George had the courage to walk into the public square and shout::”All gentile gods are devils. My God is the One who made the heavens and is the true God.” For this George was arrested and put to death. His witness is said to have caused the conversion of many and given courage to those already baptised.

THE LEGEND OF ST. GEORGE AND THE DRAGON

The wonderful variation of tales regarding St. George came centuries after his death. According to the well-known legend, St. George killed a dragon that terrorised a village by demanding human sacrifices. In a more embroidered version of this tale a princess was to be the dragon’s next victim. The fearless George intervened, slew the dragon and saved the princess. Thus the whole village elected to be baptised. Another interpretation of this legend relates that thanks to the prayers of St. George, the dragon fell down exhausted at the feet of the saint. Elisaba, the young girl who was to be the dragon’s victim, was then able to take the beast on a lead like most obedient dogs. On seeing this the inhabitants of the town were overwhelmed and asked to be baptised.

WHAT WE SEE IN THE ICON OF ST. GEORGE 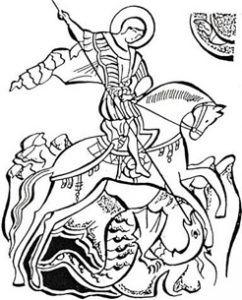 St. George is depicted in iconography as a knight, often riding a white horse (some icons show him on a black one) actually slaying or about to kill the dragon. Some icons include the town showing the distressed princess, her father and other inhabitants inside beautifully constructed buildings. The Hand of Christ blessing St. George, is often depicted in one corner,

SYMBOLISM OF THE ICON

The white horse is an apocalyptic inspiration based on Rev. 19:I 1 “And now I saw heaven open and a white horse appear. Its rider was called Trustworthy and True: in uprightness he judges and makes war”. White symbolises victory. The depiction of George riding a white horse indicated that God’s Grace carried St. George to the heroism of martyrdom. The dragon is an image of personified evil “that ancient serpent, which is the devil and Satan”. The princess symbolises the Church as being saved from the devil.

THE FEAST DAY OF ST. GEORGE

Constantine the Great built a great church over the tomb of St. George in Lyda, in Palestine and his feast day is kept on the 23rd. April. It is a day in the Russia when horses were blessed and in more temperate regions they were let out into the pastures for the first time after the harsh winter

St. George became a patron saint of knights and soldiers. Like St. Nicholas of Myra, he became a deliverer of prisoners and protector of the poor. As the name George means “husbandman” or “farmer” he became a patron of agriculture, shepherds, flocks and horses.

THE VENERATION OF ST. GEORGE

The veneration of St. George originated in the Byzantine Levant and did not become popular in England until the returning crusaders brought the saints cult back with them. In 1348 King Edward 111 made St. George the patron saint of the Knights of the Garter. It was around this time that St. George seems to have replaced Edward the Confessor as England’s national saint.

William Dalrymple in his book “The Holy Mountain” mentions that the English are not the only ones to claim St. George as their special saint. Even today he is popular among Christian Arabs who acclaim him for helping them in danger and difficulties. Some even claim to have seen him in visions. William Dalrymple also points out that a number of places in the world, claim to possess parts of his bones e.g.

THE INNER MEANING OF THIS ICON

Stephene Rene has described this icon as representing an event of the inner life’s energies. The depiction of this Christian warrior differs from the popular and contemporary secular pagan warriors inasmuch as a Christian tradition states that the dragon is tamed and not destroyed. This applies to the inner struggle within our lives and such a concept predates Carl Jung. Thus the icon of St. George can become an image of our inner struggle, fights and journey; an “inner landscape of the soul”.

SOME EXAMPLES OF HYMNOLOGY FOR THE FEAST OF ST. GEORGE

GEORGE AS DEFENDER AND PATRON

Great Defender of Christ, you fought the good fight for the faith and offered to God an acceptable sacrifice, wherefore you received the crown of victory. Through your intercession,  Holy One, may Christ grant forgiveness of our transgressions to us all.

Holy George clothed in victory, we know that you are a brilliant star, radiant sun in the firmament, a pearl of great price, a precious and dazzling gem, a son of the day and a valiant person among the martyrs.  You suffered many tortures as pure gold passes through consuming fire

GEORGE AS VANQUISHER OF EVIL

O courageous George fortified with the shield of faith, the helmet of grace and the spear of the cross, you could not be vanquished by your enemies. As a Christian hero you defeated the ranks of the evil spirits and made your abode with the angels. Since you are the patron of the faithful, sanctify them and save them through your intercession when they call upon you.

All blameless George guard me and come to my help when I travel by sea or walk on the land or sleep at night. Save when I rise and guide me, that I may follow the Lord’s Will, finding forgiveness for the transgressions of my life. I seek refuge under the shadow of your wings.

GEORGE LIVED ACCORDING TO HIS NAME

O George the soldier, you have lived according to your name and its meaning by carrying on your shoulders, the cross of Christ, you ploughed the earth that had been made barren by Satan’s errors. Uprooting the thorns of pagan worship you planted the vine of Orthodox faith, wherefore you gave forth healing for the faithful throughout the world. Since you became trustworthy in the Holy Trinity, we beseech you to intercede for the safety of the world and the salvation of the people.

IN OUR INNER STRUGGLES WE ARE ENCOURAGED BY THE EXAMPLES OF ST. GEORGE

Let us extol spiritually that intelligence superseding the senses in its diamond hardness, George the ever memorable martyr. He has warmly delivered himself for Christ.

Love overcame nature and persuaded the lover to reach out through death to the Beloved, who is Christ our God, the Saviour of our soul …