Rublev’s Trinity Icon was painted between 1408 and 1425 and is the supreme example of the Moscow School of iconography. 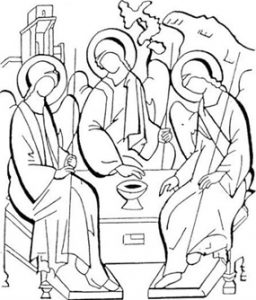 It is thought that Rublev lived between 1370 and 1430. Andrei Rublev is associated with Theophan the Greek, who came to Novgorod just before 1478 and painted walls of about 30 churches in the next 30 years, especially in Novgorod and Moscow. Rublev worked alongside Theophan, but was not his pupil. He worked exclusively in Moscow and outlying Muscovite towns, as well as in monasteries in these areas. Rublev was at one time a monk in one of st. Sergius’s monasteries dedicated to the Holy Trinity. Later, Rublev was to spend a number of years at Andronikov’s monastery: ‘.Andrinokov was a disciple of St. Sergius who chose him as hegumenos (head of a monastery in the Eastern Orthodox and Eastern Catholic Churches) of the Monastery dedicated to The Saviour not painted by Human Hands.’

Rublev’s stay at this monastery throws light on the intellectual and spiritual atmosphere at this time since the monastery attracted talented icon painters and architects. The icon painters came from places such as Serbia, Bulgaria and Greece – many having to flee from their own lands which were threatened by Turkish invasions – and were able, at this monastery to cultivate their own art. In fact, Rublev was sent as a young monk to a monastery in Russia, renowned for being a centre of the best Byzantine traditions of calligraphy, iconography and religious music.

ORIGIN OF THE TRINITY ICON

In 1408, the monastery of the Holy Trinity of St.. Sergius was completely destroyed, but Blessed Nikon, with the help of the Princes of Moscow, set about reconstructing it according to its original plans, expanding it north eastwards as well. The Chronicles relate that Blessed Nikon ‘after having built the Church and adorned it with much beauty, called in excellent painters, a class above all others, named Daniil, Andrei, and his work companions.’ Rublev received “obedience” from Nikon ‘to paint an icon of the Holy Trinity to the praise of St.Sergius … for the monks in contemplating the Holy Trinity to overcome hateful divisions.’ In other words, the monks were to have something peaceful to aid contemplation in a midst of a world of turmoil and violence. As someone said: “An icon represents a world that is spirit, yet has lost none of its flesh. It is a presence both human and divine. It is an art with grace. It helps us to find words to speak with, paths to walk on, even when the future seems to be ominous and menacing at every turn. “ Rublev’s icon reflects this.

Rublev was old when he received the commission to paint the Holy Trinity and so had behind him much work experience (and prayer) that now held him in good stead for the cask he received and achieved.

WHAT WE SEE IN THIS ICON

The icon depicts the Holy Trinity by representing the Biblical scene of three men appearing to Abraham at the Oak of Mambre. To show they belong to the heavenly world, they are depicted as three winged angels, but the circumstances of their appearance are passed over in silence.

Rublev’s icon of the Holy Trinity

The cosmos is represented in the background by a mountain and tree – the tree of life – and Abraham’s house is seen, because the main focus lies not in the Biblical meaning but in its dogma, or theological teaching. Just before Rublev’s time the historical aspect of the event was more dominant, as Sarah was often depicted serving the calf, objects on the table, and Abraham entertaining the guests or serving them with Sarah. But in Rublev’s icon the treatment is reduced to the essentials, because it excludes these other details. The visiting angels sit in quiet conversation, the table becomes an altar with only the Eucharistic cup on it, and the oak tree and house become symbols. Geometrical structure, especially circles, creates a unity allowing for representing the Trinity as a movement of unity and love.

According to Ouspensky, the angels are grouped in order of symbols of faith, from left to right, God the Father, God the Son, God the Holy Spirit. The angel on the left wears a pale blue cloak with brown and blue-green highlights. He represents the Father blessing the chalice in a gesture indicating His will for the sorrowful mission of His Son as assigned to Him. The centre angel wears a purple under­garment and blue cloak, the customary colours used for depicting Christ on icons. His priestly function is symbolised by His wearing a stole and blessing the cup in a restrained gesture, indicating acceptance in humility and obedience to offer Himself as a sacrifice. The right hand angel is clothed in the principle colour of green, which Dioynsius, the Areopagite says signifies ‘youth, fullness of powers’ – thus suggesting properties of the Holy spirit. The elongated bodies of the angels are 14 times the head (instead of the normal 8). There is an invisible circle enfolding the three angels, and, wherever one looks, echoes of circles can be seen. The overall colour in this icon, with its tranquil blues and green, overlain with paler tones, combined with soft ivory white producing a transparent effect, shows forth harmony, unity and concord. This, in turn, is echoed in the forms and lines in the icon. As Ouspensky says, This icon, with its inexhaustible content, its harmonious composition, majestic calm, figures of the angels conversing in silence and the light joyous summer colours, could only be the creation of a man who has stilled, in his soul, all agitation and doubt, and has been illuminated by the light and knowledge of God.’

In the Orthodox Church, from which icons originate and are still much in use, there is no specific Feast of the Trinity or Trinity Sunday. The Trinity is not only used as a formula and in prayer in the services, but is linked with the Holy Spirit at Pentecost. Hence the icon of Rublev would come much to mind at the Feast of Pentecost. Let us ponder over some poetical translations referring to this from hymns used on the Feast of Pentecost in the Orthodox Church.

SOME OF THE LITURGICAL TEXTS FOR REFLECTION

Come, all you nations of the world: let us adore God in three Holy Persons, Father, Son and Holy _Spirit – Three in One. From all eternity the Father begets the Son, equal to Him in eternity and majesty, equal also to the Holy Spirit glorified with the son in the Father – Three Persons and yet a single Power and Essence and Godhead. In deep adoration, let us cry out to God: ‘Holy is God who made all things through the Son with the co-operation of the Holy Spirit! Holy the Mighty One through whom the Father was revealed to us and the Holy Spirit came to this world! Holy the Immortal One, the Spirit, the Counselor, who proceeds from the Father and reposes in the Son! All – Holy Trinity, glory to You!’

We, your faithful people, prostrate out souls and bodies before you, 0 Lord. We sing a hymn of praise to You, the Eternal Father and to your Son equal to You in eternity, and to your All – Holy Spirit, co-eternal with You, the Enlightener and Sanctifier of our souls.

Let us sing a hymn of praise to the consubstantial Trinity, Father, Son and Holy Spirit, for this is the command and teaching of all prophets, apostles and martyrs.

We have seen the true light, we have received the heavenly Spirit, we have found the true faith! Wherefore, we worship the undivided Trinity for having saved us.

This as St. Gregory of Sinai (c.1265-1340) writes: The Trinity is simple unity, unqualified and uncompounded. It is three-in-one, for God is three-personed, each person wholly interpenetrating the other without loss of distinct personal identity

USING THE ICON TO ENTER INTO RESTFULNESS AND PEACE

The Trinity Icon is a supreme ‘Model’ of the unity, harmony and peace an icon should convey to the onlooker and, perhaps, with the following texts we can be aided and invited to let the icon ‘speak’ to us as we ponder and pray.

‘Come now, little person, turn aside for a while from your daily employment, escape for a moment from the tumult of your thoughts. Put aside now the weight of your cares. Let the burdensome distractions free yourself to rest a while for God, and rest a while in Him‘ – St. Anselm

‘We who mystically represent the cherubim, who sing to the life-giving trinity, the thrice holy hymn! Let us now lay aside all earthly care . ‘ (from the Cherubic Hymn or ‘Cherubikon’).