Seraphim was born on July 19 1759 and died on January 14th 1833. He was baptised Prokhov after St. Prochoros one of the deacons of the early Church and a disciple of John the Evangelist. St. Seraphim was canonized in 1903 and is the most-renowned of the Russian saints. As a young boy he was healed through a wonder working icon of the Mother of God of Kursk. When Seraphim decided to become a monk his mother blessed him with a large copper crucifix which St. Seraphim wore over his clothing for the rest of his life. 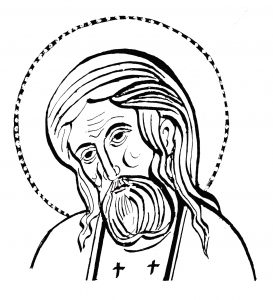 In 1777, aged nineteen years, he joined the Sarov Monastery as a novice and when he took his vows in 1786 he was given the name Seraphim and became the spiritual father of Diveyero Convent. While living as a hermit he was attacked by a gang of thieves who mercilessly beat him with the handle of his axe and left him for dead.  He spent five months in a monastery to recover, but was left with a hunched back for the rest of his life. He returned to the forest where he spent one thousand successive nights in prayer. In 1815 in obedience to a spiritual experience attributed to the Mother of God he began admitting pilgrims to his hermitage.  St. Seraphim became very popular owing to his healing powers and gift of prophecy. Hundreds of pilgrims visited him, drawn by his ability to answer their questions even before they could ask him. Although harsh to himself, St. Seraphim was kind and gentle towards others, always greeting visitors with a prostration and a kiss, exclaiming: “Christ is risen” as well as calling everyone “my joy.” He died kneeling before an Icon of the Theotokos, which as a result is called: “Joy of all joys.”.

St. Seraphim is often seen in icons wearing peasant clothes, kneeling with hands upright in prayer, a crucifix worn about his neck and sometimes with hands crossed in over his chest.

You loved Christ from your youth 0 blessed one, and longing to work for Him alone you struggled in the wilderness with constant prayer and labour. With penitent heart and great love of Christ you were favoured by the Mother of God; wherefore we cry to you: “Save us by your prayer, 0 Seraphim our righteous father.”

Having left the beauty of the world and what is corrupt in it, O saint, you settled in Sarov Monastery and having loved an angelic life you were for many the way to salvation. Wherefore Christ has glorified you, O father Seraphim, and enriched you with the gift of healing and miracles and we cry: “Rejoice, O Seraphim, our righteous father.” 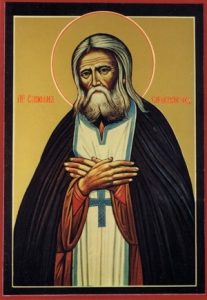 From the Akathist (hymn) of St. Seraphim of Sarov

Rejoice, man of prayer who acquired the peace of the Holy Spirit.
Rejoice revered hermit who prayed on a rock for a thousand days.
Rejoice St Seraphim, spiritual father of the faithful. Rejoice bearer of offenses, consoler of people.
Rejoice dedicated intercessor for all the troubled. Rejoice vanquisher of condemnation.
Rejoice builder of righteousness.
Rejoice planter of reconciliation.
Rejoice compass who points the way to inward peace. Rejoice heart of mercy.
Rejoice reality of joy.
Rejoice ray of sunlight on those desolate times.
Rejoice faithful monk who worshipped God in both word and deed.

Seraphim from the innermost being of each one of us, from our greatest yearnings for truth and love, from our deepest needs for intervention into our struggles in this temporal life — proclaim to us: “Christ is risen!” and guide our steps to eternal life. Help us to choose to walk on the path of prayer in whatever station God has placed us and we ask …