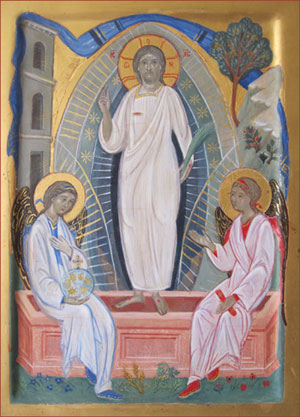 This icon can be read at two levels: a first or primary level of meaning is the depiction of a Gospel scene, where two white angels sitting at either end of the tomb reverently point to the Risen Christ. Beyond this, a layer of mystical meaning is hinted at, pointing to the manifestation of the Holy Trinity in the Garden of the Resurrection, through a series of Trinitarian symbols, and visual references from the sacred tradition (such as Andrei Rublev’s icon of Old Testament Trinity).

The inspiration for this icon comes from John’s gospel, when it describes the day of Christ’s Resurrection (John 20:11-17): …’Meantime Mary stayed outside near the tomb, weeping. Then, still weeping, she stooped to look inside, and saw two angels in white sitting where the body of Jesus had been, one at the head, the other at the feet. They said, ‘Woman, why are you weeping?’ ‘They have taken my Lord away’ she replied ‘and I don’t know where they have put him ‘. As she said this she turned round and saw Jesus standing there, though she did not recognize him. Jesus said, ‘Woman, why are you weeping? Who are you looking for?’ Supposing him to be the gardener, she said, ‘Sir, if you have taken him away, tell me where you have put him, and I will go and remove him’. Jesus said, ‘Mary!’ She knew him then and said to him in Hebrew, ‘Rabbuni!’ – which means Master…”

Compare this text to the one in the Old Testament (Genesis 18): …..’The Lord appeared to Abraham at the Oak of Manre while he was sitting by the entrance of the tent during the hottest part of the day. He looked up, and there he saw three men standing near him. As soon as he saw them he ran from the entrance of the tent to meet them, and bowed to the ground. ‘My Lord,’ he said ‘I beg you, if I find favour with you, kindly do not pass your servant by. A little water shall be brought; you shall wash your feet and lie down under the tree. Let me fetch a little bread and you shall refresh yourselves before going further. that is why you have come in your servants’ direction.’ They replied, ‘Do as you say’…..”

This second reading was the inspiration behind one of the most famous icons by the Russian icon painter Rublev: ‘The Old Testament Trinity’ (or ‘The Hospitality of Abraham’) Within the Sacred Tradition in art, the inspired icon by Rublev provides, at one level, the “three angels who visited Abraham at the oak of Mamre” (although with no sign of Abraham, or his wife Sarah serving at the table, as other icons do), but beyond that, Rublev suggests another level: a pre-figuration of the Holy Trinity, and this is why the icon is known as “The Old Testament Trinity”. Rublev gave the three angels equal importance and identical faces, embracing them in the composition with a perfect circle, the symbol of God, and showing the other symbolic elements around: the House (Church, Holy Spirit), the Mountain (The Father), and the Tree (the Son), and the cup on the table (the Eucharist).

Other classical well known examples of manifestations of the Trinity are – the representation of the crucified Christ, with the Father holding the arms of his son as an offering, with the Holy Spirit hovering between the two (this in the case in the famous fresco by Masaccio and in many icons). To me it seems inconceivable to think of Christ’ Resurrection without a Trinitarian manifestation, dimension, or presence. After having been buried for three days, Christ opens his eyes and at that moment sees the Father as the Holy Spirit is made manifest in the love expressed between them. This moment is steeped in the mystery and underpins the Christian faith. The mystery is then revealed in a garden, and announced by two angels dressed in white, speaking (as in the case of those appearing to Abraham) with a single voice.

The central figure of my composition is now the Risen Christ, who stands in his tomb, the altar of immolation. The Eucharistic cup on Rublev’s table, now is Christ Himself, with the symbols of the vine and wheat directly below, in the garden.

One angel is holding a globe symbolizing the creation of the universe, to which Christ provides the ultimate purpose and meaning. The angel on the right holds the sacred prophetic scroll, pointing at the incarnate Logos. Although the two angels are dressed in white gowns their inside shirts are blue and red. Christ is dressed in white, with gold outlines standing for yellow. Blue, red and yellow are the three colours of the rainbow, which God gave to Noah after the Flood, as a sign of his reconciliation with the World. Here through Christ, “The Light of the World”, is this Reconciliation renewed. Christ has a cruciform halo whist the two angels have rayed or tri-radiant halos. In the garden flowers and plants appear, each with three leaves or petals, and under the angel on the right, seven small red flowers spring from a single stem (symbolic of the seven Gifts of the Holy Spirit). In the icon Christ’s divinity is symbolized with a mandorla made by the intersection of two circles (one representing the human nature, the other the divinity of Christ) with rays emanating from him. The two angels have circles as mandorlas, which converge with that of Christ, thus the three interconnecting mandorlas could be seen as another symbol of the Holy Trinity.

Black, or darkness has a meaning in sacred art, being the absence of light they embody several religious profound meanings, from silent suffering, to the lack of understanding due to ignorance. Black windows and doors often appear in compositions (such as in Rublev’s Trinity, and in Duccio’s works), or as back holes in a mountain (as in Theophanes the Greek’ icon of the Transfiguration). These black windows or holes are a reminder that, as we are lifted to a higher spiritual level, using icons as catalyst for prayer, we are still subject to our mortality. On a beautiful sunny day, the brighter the sun the darker the shadows. Here the Risen Christ stands against the darkness of death (the entrance of the tomb) holding the palm of peace (“Peace be with you”). To emphasize that this is a mystery which affects the entire universe, the stars appear within the mandorla, as he bestow his blessing. In the mountain: an apple tree, since Christ is “the new Adam” and next to the crack showing a black hole, an Old Testament prophetic symbol of the Incarnation: the Burning Bush. Crowning the entire scene a blue curtain, to indicate, as in the case of icons, that the scene takes place in an interior, but here is blue instead of red, since blue is also a colour attributed to Mary, Mother of God, thus the cloth is folded to suggest the letter M.

I hope that this icon demonstrates that “Icons a Living Tradition” means the same as “Icons a Living Faith”. When something is living it is not static but dynamic. In this way the mysteries of our faith, as in other centuries, are a never ending source of inspiration, or prototypes. 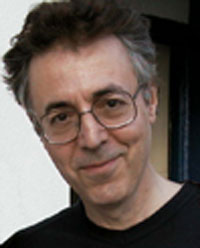 In London, he was Head of Art at Essendine Art Centre (71-90), and then Head of Fine Art and Theoretical Studies at Kensington and Chelsea College (1990-2004).

He has exhibited his work widely in London, Paris, Barcelona and N.Y.

His book ‘The Technique of Icon Painting has been published in many languages but is now, unfortunately,  out of print.  However the book may still be purchased (second hand) on-line via Amazon and other on-line book sellers.