Origin of the Feast of Palm Sunday. 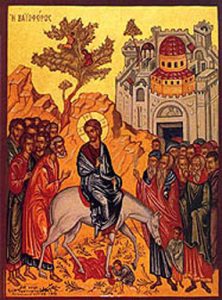 During the fourth century, at the traditional place where the entrance into Jerusalem was thought to have occurred, Palm Sunday was first commemorated by a public reading of the Gospel in which Christ is hailed as King of Israel taking possession of His capital city, Jerusalem, a symbol of the Heavenly city. After that a bishop would ride an ass surrounded by people carrying palms and singing hymns. They went up to the Church of the Resurrection. Every Eastern Church took up this celebration in the form of a procession. This was later adopted by the Church of Rome in the year 1039. Western Christendom still commemorates some form of a procession with palm or green branches, or crosses made from palm leaves. Within the Eastern churches this has tended to fall into general disuse.

What we see in the Icon of Entry into Jerusalem.

Christ is seated on a donkey, side-saddle, with his legs over the left side of the beast. He holds a scroll in His hand and His body is turned so that Christ faces straight out from the icon. Sometimes this gives the impression at first sight that Christ seems to be looking at the group of disciples behind Him. The group of the Apostles is always led by Peter. On the other side of the icon there is another group; they are the people coming out from Jerusalem to greet the lord. At the front of the group a few men are carrying palm branches. Children, depicted very small in size, cast clothes to the ground before The Lord; other children (usually about two) are shown cutting branches from the tree. On the right of this icon the buildings of the city are beautifully composed in a compact setting. The crowd emerges from a large gateway of the city wall. The donkey seems to be positioned to uphold The Lord between the disciples and the crowd. Sometimes a child is feeding the donkey! The overall impression of this icon is not one of excitement as the Scriptural event portrays, but one of calm. It is to show us that Christ comes as lord of a Kingdom that brings unity, harmony and peace.

A reflection on similarities in this icon to that of some Holy Trinity icons.

John Baggley in commentating on the this icon found it interesting to note that the background features of the mountain, the tree, and city, could bear reference to the similar background features in some of the icons of the Holy Trinity. He suggests that the mountain could evoke that of the Mount of Olives or other “mountain top experiences” such as the divine revelation at Sinai, Horeb, or Mount Tabor. The tree with the children gathering palm branches evokes the memory of the oak of Mamre and the Tree of Life; the stylized city could be reminiscent of the house of Abraham as each building in its own way showing different forms of human dwelling places. Furthermore, “while commemorating the particular events of Palm Sunday, the icon has an eschatological dimension that looks beyond the specific historical event to its fulfilment in the ‘the holy city Jerusalem coming down out of heaven from God, in its radiance like a most rare jewel.’ (Rev. 21:11)” (Baggley)

Today the grace of The Holy Spirit has gathered us together.

“Today the grace of the Holy Spirit has gathered us together, and we all take up Your cross and say: Blessed is He that comes in the name of the Lord: Hosanna in the in the highest.” This is a frequently recurring verse in services for Palm Sunday. Bishop Kallistos Ware sees this as a possible reflection of the custom of early Palestinian monks in the fifth and sixth centuries, who shortly after the feast of the Epiphany would leave their monasteries to make a Lenten retreat in the wilderness, either alone or with a companion. They would spend the weeks in silence and continual prayer, eating nothing but wild roots. Then on the Saturday afternoon of the sixth week of Lent, they would return to their monasteries for the Vigil Service of Palm Sunday in order to keep Holy Week together with their other monastic brethren. Hence the verse: “Today the Holy Spirit has gathered us together…” The word ‘Today’ is used within the great events (and other feasts) of Great and Holy Week to signify a re-enactment of the past in the present. It makes us aware of commemorating the past but also its implications for us ‘today’.

Links between the raising of Lazarus and Palm Sunday.

Reference to the raising of Lazarus in some of the hymns on Palm Sunday could also reflect the early church’s link between these two commemorations, as Egeria, a late fourth century pilgrim at Jerusalem recorded in her ‘diary’. She mentions that after the commemoration of Lazarus being raised at Bethany on the Saturday afternoon when the account of this event was read from John: 1ff, on Sunday there was a procession from the Mount of Olives to the Church of the resurrection. People carried palm branches and sang “Blessed is he who comes”. As the casual links between the events of Lazarus Saturday and Palm Sunday came to be commemorated in churches in other parts of the East they were less dramatically represented, and each day came to have great significance for the Church. One hymn at Vespers, which is echoed in other parts of the office, mentions: “Prefiguring for us Your Holy resurrection, loving Lord, by Your command You raised up from death Lazarus Your friend, who was without the breath of life, and after four days in the tomb he had begun to stink. Then, O Saviour you gave a sign to the Gentiles. Therefore, Israel, Your beloved, offers You praise out of the mouths of innocent babes and sucklings as they behold You Christ, enter the Holy City…”

Children mentioned in the Hymns.

He who is praised by the Seraphim and rides on the Cherubim now rides on an ass.

“O You who ride on the Cherubim and are praised by the Seraphim, You rode on an ass, O Good One! The children sang hymns to You, as David had done to God… Glory be to You, O merciful God and Lover of humankind… He who sits upon the throne of the cherubim, for our sake sits upon a foal, and coming to His voluntary passion, today, He hears the children cry: ‘Hosanna!’ while the crowd replies: ‘O Son of David make haste to save those whom You have created, blessed Jesus, since for this cause You have come, that we may know Your glory…’ Give praise with one accord, O peoples and nations: for the King of the angels now rides upon a foal, and He comes to smite His enemies with the Cross in His almighty power. Therefore the children sing to Him with palms in their hands: ‘Glory to Thee who has come as Conqueror: glory to You, O Christ the Saviour; glory be to You, our God, for You alone are blessed.’

We in spirit can sing praises…

“With our souls cleansed and in spirit carrying branches with faith, let us sing Christ’s praises like the children, crying aloud to the Master: Blessed are You, O Saviour, who has come into the world to save…. and in Your love for humankind You have been pleased to become the new Adam. O Word, who has ordered all things for our good, glory to You…” St. Andrew of Crete (c.660-740) one of the great Byzantine hymn-writers, urged us to spiritually “spread ourselves before Him” when he wrote: “Come let us run with Christ as He presses on to His passion. Let us imitate those who have gone out to meet Him, not scattering olive branches or garments or palms in His path, but spreading ourselves before Him as best we can, with humility of soul and upright purpose. So may we welcome the Word as He comes, so may God who cannot be contained within any bounds, be contained within us… He is pleased to come and live with us and to raise us up or bring us back to Him through His kinship with us… He will not cease to raise our nature from the ground, from one degree of glory to another, and has manifested it with Himself on high.

So it is ourselves that we must spread under Christ’s feet, not coats or lifeless branches or shoots of trees, matter which wastes away and delights the eye only for a few hours. But we have clothed ourselves with Christ’s grace, or with the whole Christ – “for as many of you as were baptized into Christ have put on Christ” – so let us spread ourselves like coats under His feet”. Let us offer not palm branches but the prizes of victory to the conqueror of death. Today let us give voice with the children to that sacred chant, as we wave the spiritual branches of our soul: “Blessed is He who comes in the name of the Lord, the King of Israel.” So we can pray from one of the hymns at Mattins: When He drew near to Jerusalem for His voluntary Passion, the people that sat in darkness and the shadow of death took, as tokens of victory, boughs of trees and branches of palms, so foretelling His resurrection. Do You Yourself, O Master, keep and preserve us also, who following their own example on this feast carry in our hands palms and branches and who like the crowds and the children cry to You: ; ‘Hosanna!’. With hymns and spiritual songs may we attain the life-giving resurrection on the third day: “through Jesus Christ our Lord, with whom You are blessed, together with Your most holy good and life-creating spirit, now and ever, to ages of ages. AMEN.”