History of this Icon 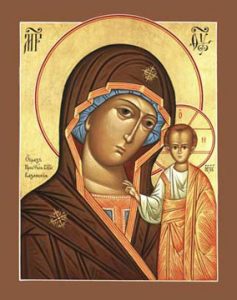 This icon was discovered in Kazan where it made its “apparition”. It is related that in Kazan, in 1579, a nine year old girl called Matronia had a vision or dream, telling her that the Mother of God commanded her to point out to the eccelesial and secular powers the place where her miraculous icon was to be found buried in the earth. The icon had been wrapped in rags and hidden in the ashes of her family home which had been destroyed by the invading Tartars. However, the clergy and dignitaries refused to believe Matronia’s message. Finally, the young girl and her mother exhumed the icon, which despite the damage around, it was undamaged. The oppressed population of the area regarded this as a miracle. The icon was carried with pomp to the cathedral.

The newly appeared icon of the Mother of God became renowned through several miracles and drew pilgrims from all over Russia. The icon was later transferred to Moscow where it was housed in a specially built cathedral bearing its name. In 1721, Peter the Great took it to his new capital of St Petersburg. Here it continued to be an object of veneration by Peter and his whole court.

Over the years the icon of the Mother of God of Kazan became known as the Liberatrix and Protectress of Holy Russia. It has served as a rallying point for the Russian people against various invaders including the Swedes, the Poles, and Napoleon’s armies.

On October 22nd 1612, the icon of Kazan accompanied the national troops as they sought to liberate Moscow from the Poles. It gave courage to the Russian army in 1812. At the end of the Litanies of Peace, consecration, other prayers and remembrances of the Mother of God include “remembering especially our most holy, most pure, most blessed and glorious Lady, Mother of God, and ever Virgin Mary…”… “Commemorating our most pure, most blessed Mary Mother of God with all the saints, let us commend ourselves and one another to Christ our God”

“It is truly right to bless you, 0 Mother of God, ever blessed and most pure, more honourable than the cherubim and more glorious beyond compare than the seraphim. Without defilement, you gave birth to God the Word, true Mother of God we magnify you”. (Liturgy of St John Chrysostom).

“0 full of grace, in you all creation rejoices, the choir of angels and the whole human race. Holy Temple and Spiritual Paradise, glory of the Virgins from whom our God, who exists before the world, became a child! Your womb was His throne, and He made your womb more spacious than the heavens. 0 full of grace, all creation rejoices. Glory to you!” (Liturgy of St Basil)

Maybe we can sum up the appreciation and veneration inspired by the Mother of God from a homily by John Lustus Landsberg, a Carthusian who lived in the fifteenth century by quoting:

The two main hymns of feasts and commemorations are called the Troparion and Kontakion. For the feast of the Mother of God of Kazan they are as follows:

0 fervent intercessor, Mother of the Lord Most High, you pray for all to your Son, Christ our God, and you contrive to save all who have recourse to your powerful protection. 0 Sovereign Lady and Queen, help and defend all of us who in troubles and trials, in pain, and burdened with many sins stand before your most pure icon in your presence and pray to you with compunction of soul, contrition of heart, and with tears, and who have unflagging hope in you. Grant to all what is good for us, deliver us from all evil, and save us all, 0 Virgin Mother of God. For you are a divine protection for us, your servants.

Let us run, 0 people, to that quiet and good haven, to the speedy helper, to the ready and warm salvation, to the Virgin’s protection. Let us hurry to prayer and hasten to repentance, for the most pure Mother of God pours out for us unfailing mercy, anticipates our needs with her help, and delivers from great disasters and evils her well-behaved and God-fearing servants.

During the Russian revolution the Bolsheviks were quick to seize the icon, which they even regarded as an expression of the soul of the Russian people. They hid it and then destroyed the cathedral in Red Square. When they tried to build another structure on the same site, the operation was beset with inexhaustible problems. “The superstitious” saw this as some sort of sign and the site was left as open ground for many years.

During the Second World War the icon was believed to have saved the Russian army at the battle of Koeniasburg in February 1945. In keeping with a not altogether extinguished Orthodox tradition, a religious procession was organised at the time of battle with the icon at its head. As the procession passed by the crowds, people crossed themselves and prayed to the Mother of God to “save us”. Suddenly the firing stopped for fifteen minutes, the German weapons had jammed.

The Kazan icon is one of the most popular icons in Russia. It is believed to have healing powers such as restoring sight to two blind men. The last Tsar, Nicolas II, is said to have seen a vision of it on the eve of his abdication. Even Stalin was forced to acknowledge its hold over the Russian people.

Recent History of this Icon

The recent history of the icon is unclear. Some sources say it was found in the collection of an English nobleman who brought it to Poland. Others suggest it was part of the collection of the British Museum. The icon came up for auction in New York in the early 1990s. It was bought for about three million dollars by a Roman Catholic group called the Blue Army. They presented it to Pope John Paul II. In 1956 Cyril G Bert, an expert on Byzantine art for the Victoria and Albert Museum, conducted an extensive examination of the icon and reported: “the inescapable conclusion is that the present icon is the Virgin of Kazan, formerly in the Kazan Cathedral in Moscow.” However, an expert analysis for the papacy in April 2003 said that it is an eighteenth century reproduction although a very accurate and expertly painted one. Mother of God of Kazan icons are numerous. It is estimated that ten million have been hand-painted in Russia.

What we see in this Icon

In this icon we can see that the Mother of God just shows her head and shoulders. Her hands are not shown. Christ is represented to his waist. His left hand is hidden under his garment and His right hand is blessing. Christ is shown full face and is standing upright. The head of the Mother of God is inclined towards the Infant Emmanuel. The face remains grave and expresses her feminine but saddened tenderness without looking directly at her Son, but looking towards the eyes of the onlooker. Ousepensky feels that she seems to contemplate her Son’s mission as Saviour come into the world to suffer the Passion. He thinks that since this icon is not that of the Virgin presenting her Son as in the theme of the Hodigitia (she who shows the Way), the Byzantine theme of the Hodigitria is completely transformed in the Russian icon of the Kazan Mother of God.