There are a number of Icons in Winchester Cathedral of varying dates and origins, the most prominent, written by Sergei Feyderov, were commissioned by the Cathedral’s Chapter in 1992, and form a ‘Deisis’ unusually facing west, is in the retro-choir. They occupy a most prestigious space and replace polychrome figures of early Saxon kings, queens and bishops destroyed in a Reformation iconoclasm of the 16th Century. 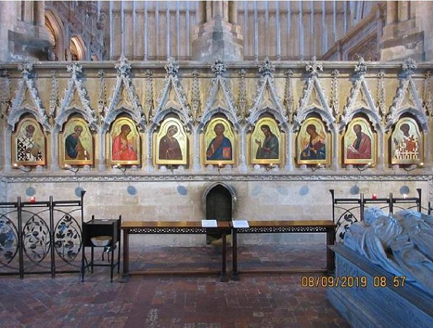 Reading from south to north they portray St Birinus (Apostle to the West Saxons), St Peter, the Archangel Gabriel, The Theotokos, Our Lord, St. John the Forerunner, the Archangel Michael, St Paul and finally St. Swithun, this last a ‘prototype’.

These Icons occupy bays in a decorated Early English screen in the middle of which lies the ‘Holy Hole’ a small early Gothic arch leading to a passage along which pilgrims were able to crawl so as to approach the reliquary containing the relics of St. Swithun (852– 863 CE) , translated from the Old Minster in 1093, which itself lay just behind the high altar. What is now known as the Presbytery and Choir was until the dissolution of the Priory in 1538/39 the Priory Church, reserved for the exclusive use of the Benedictine community, thus the ‘Holy Hole’ allowed pilgrim access to the relics of the Saint without impinging on the monastic church. The Icons are written on limewood panels with ‘kovtchegs’ and are typical of Feyederov’s work. The backgrounds are of matted gold leaf. The overall impact is very fine and persuasive.

The Retro-Choir of Winchester Cathedral is home to various ecumenical works of religious art. 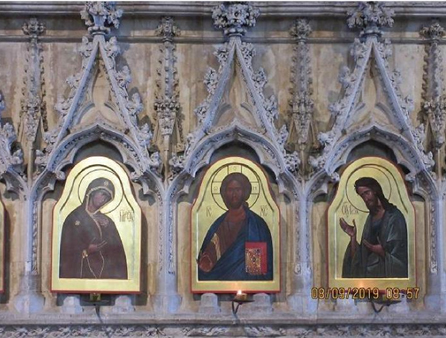 The Deisis attracts Orthodox visitors as might be expected. There is a significant Orthodox community in Winchester most of whom worship in Southampton.

Tim is a new BAI member who conducts visitors around the Cathedral.